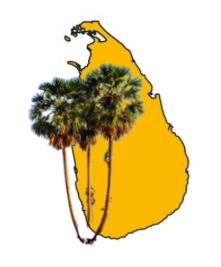 Eelam/ஈழம் (Pronounced: īḻam); the ancient Tamil name of the teardrop-shaped island in the Indian Ocean, known in modern times as Sri Lanka.

The term “Eelam” was used as early as 2nd – 1st BCE and was found inscribed in a cave at Thirupparankunram in Tamil Nadu, India. The Tamil Brahmi inscription described a man from Eelam bringing a gift. Archaeological evidence, stone inscriptions, and foreign records show that the ancient civilizations and kingdoms of Sri Lanka, primarily in the northern parts, were of Dravidian Tamil origin and were referred to mainly as Eelam Tamilars. Several mentions of Eelam were discovered in Sangam literature from the 1st Century BCE onwards.  Given the proximity to India, Eelam always had a strong relationship with their counterparts in India, reaching far back to various ancient Tamil empires such as the Cholas and Pandyas.

The island of Sri Lanka underwent several social power shifts by numerous foreign groups over time. Yet, it preserved the ancient Eelam Tamil culture and tradition even after Sri Lanka gained sovereignty. Today, an estimated 3 million Eelam Tamilars is living in Sri Lanka and many more abroad. Eelam Tamilars diligently protected the rich history and culture of Eelam, solidifying their unique place in Tamil history, as well as their own respective culture, literature, and much more that we hope to share with others.

If you are interested in making a gift to the Eelam Tamilar Diaspora Endowment, please donate via the form below.